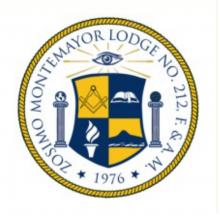 Named in honor of the late WB Zosimo Montemayor, a pioneer educator and the first President of the Central Mindanao University (formerly known as Mindanao Agricultural College) at Musuan, Bukidnon. WB Montemayor was the organizer and first Master of Mt. Musuan Lodge No. 155 and is considered by many to be the father of Masonry in Bukidnon.

Upon the recommendation of Mt. Musuan Lodge No. 155, a dispensation for the formation of this lodge was issued by Grand Master Teodoro V. Kalaw, Jr. on November 4, 1975 and on December 27, 1975 the lodge was formally organized. The lodge was granted a charter in April 1976 and was assigned number 212.

This lodge rapidly grew in membership taking in professionals from within the Central Mindanao University and from the neighboring municipalities. It then became inevitable that a sister lodge be formed some twenty kilometers south of Musuan called Lake Pinamaloy Lodge No. 230, with Zosimo Montemayor Lodge No. 210 acting as the sponsoring lodge.

The lodge being situated at the heart of the campus, formation of appendant youth organizations was soon realized. On November 12, 1983 it organized the Mount Musuan Chapter, Order of DeMolay and in 1987 the Golden Showers Assembly, Rainbow for Girls.