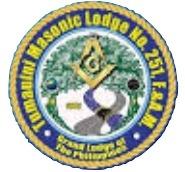 Named after the town of Tumauini in Isabela. Legend has it that the name Tumauini came from the majestic sight of two Mauini trees that greeted the first Spanish missionaries in the late 16th and early 17th century.

In 1980, seven (7) Master Masons in good standing from Tumauini, Isabela namely, Bros. Oscar A. Abad, Jovencio J. Miguel, Ruben A. Angobung, Osiquio T. Tagufa, Manuel A. Angobung, Eduardo C. Eugenio and Elpidio P. Macoco, all members of Isabela Lodge No. 60, Ilagan, Isabela proposed the organization of a new lodge in their municipality. The proposal was brought to the attentive ear of WB Conrado L. Gabriel, Sr., then Worshipful Master of Isabela Lodge No. 60. Many members of the lodge sympathized with the organizers and lent a helping hand. Subsequently, a petition to form a new lodge was prepared and signed by thirty-one (31) Master Masons in good standing from Isabela Lodge
No. 60. The petition was forwarded to the Grand Lodge on April 21, 1980 through VW Pablo D. Baguioen, then the District Deputy Grand Master of Masonic District No. 23. Thereafter, a dispensation to form a lodge was issued on April 28, 1980 by Grand Master Manuel D. Mandac who appointed the following officers to govern the lodge while it was under dispensation:

During the dispensation period of the lodge it raised twelve (12) petitioners to the sublime degree of Master Mason. Based on its performance, it was granted a charter by the Grand Lodge on April 24, 1981. On May 30, 1981, Grand Master Simeon Rene Lacson opened a Special Communication of the Grand Lodge in Tumauini, Isabela and, with the assistance of other Grand Lodge officers, constituted Tumauini Lodge No. 251. On the same day, the charter officers of the lodge were installed by RW Reynato S. Puno, then Senior Grand Warden, namely: WB Derico G. Nacion, PM, Worshipful Master; Bro. Oscar A. Abad, Senior Warden; and Bro. Jovencio J. Miguel, Junior Warden.

During the early years of the lodge, the brethren held their meetings at the North Central School, Tumauini, Isabela. The members, however, were determined to have a Temple of their own. Though it took years, they finally realized their dream in 1995. A Temple was finally constructed on a 500 sq.m. lot donated by Bro. Sinforoso Macalinao. On December 28, 1995, Grand Master Danilo D. Angeles motored to Tumauini, Isabele and he formally consecrated and dedicated the Temple of the lodge to Masonic purposes.