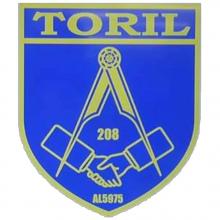 "Toril" is a native word for corral or an enclosure for cattle, where cows are kept during the night after grazing. Historically many "torus" could be seen in the area long before it was declared a district of Davao City. It is situated 15 kilometers south and eyed as another city in the future. Though countryside in atmosphere, it is bustling with commerce especially after the creation of a fish port that served many fishing businesses that opted to make Torii district as their headquarters.

The establishment of Toril Lodge was the brainchild of enterprising brethren of Sarangani Lodge No. 50 who felt that another lodge should be established some fifteen kilometers southward of Davao City so that should the city be divided, then Masonry would already be there in the newly established city.

WB's Rodolfo A. Panopio, then Junior Warden of Sarangani Lodge; and WB's Patricio Calolot and Samuel Pangan, both residents of Toril district, conceived the idea of creating a lodge and presented their plan to MW Desiderio Dalisay, Sr., then Junior Grand Warden of the Grand Lodge of the Philippines, who set in motion the creation of the lodge.

On March 22, 1975, Grand Master John 0. Wallace issued a dispensation to thirty-five brethren residing in Davao City authorizing them to form Torii Lodge in Davao. Although it was still new, the lodge demonstrated the capacity and zeal to assume the duties and responsibilities of a regular lodge. In barely one month's time it received thirteen petitions for the degrees of Masonry. At the annual communication in April 1975 Toril Lodge was granted a charter and number 208 was assigned to it.

By a strange quirk of fate, the prospective donation of the lot where the lodge was to be erected fizzled out and so the dream of the members to erect a Temple in Taguni District had to be shelved temporarily. They continued their labors at the Davao Masonic Center. Petitioners from Toril and from the other localities were initiated on the same site and raised to Master Masons, some becoming inactive, but the dream of finally erecting a Temple at Toril. District has not yet been relegated to the dustbin of oblivion.

Who knows? Some time or another, it may still be translated into reality!

The most outstanding accomplishment of the lodge is that of being the lead lodge of the first ANCOM to be held outside of Manila in 1987. Toril Lodge can also be proud of the fact that is has already produced nine District Deputy Grand Masters and over a dozen other Grand Lodge officers. Its DDGMs are Dir. Juanito Abergas, Judge Paul Arcangel, Filiciano Iriigo II, Alexander Advincula, Elmer Alias, Antonio Uy, Nelson Sison, Cesar Mendoza and Ernesto Ortonio.