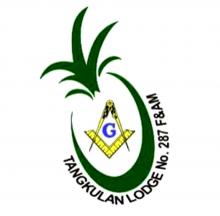 The members named this lodge Tangkulan after the original name of the town of Manolo Fortich in Bukidnon which is Tankulan. They added the letter "G" in dedication to the GAOTU.

This lodge was started by VW Jesus Cellona, then DDGM of Masonic District No. 38, who dreamed of bringing Masonry to the northern part of Bukidnon which was the only place in the province that had not yet been reached by the rays of Masonic light. After scouting the entire district and Cagayan de Oro City for possible members, he was able to come up with a petition for a dispensation to form a lodge signed by fifty-three Master Masons which included Ildefonso B. Agbuya, Jim M. Borja, Peter Lim Lo Suy, Raul G. Cabalang, Eduardo Chan, Romeo Cimafranco, Tomas Cue and Alberto Dizon, all of whom were residing in or near Manolo Fortich in Bukidnon. On October 8, 1988, Grand Master Raymundo N. Beltran gave them a dispensation to form a lodge in Manolo Fortich to be known as Tangkulan Lodge and named Raul Cabalang to be the first Master, Marcelino F. Bual, Jr. to be the first Senior Warden, and Licerio T. Perdido to be the first Junior Warden, of the new lodge. On the same day, MW Beltran took a plane for Bukidnon and instituted the new lodge with the help of RW Alejandrino "Tody" Eusebio and VW Danilo D. Angeles, at the Sarimanok Hall of the Engineering Brigade Camp. There were more or less 75 Masons in attendance during the affair. A short program followed with the
opening remarks delivered by WB Jerome N. Ramirez of Don Camilo Osias Memorial Lodge No. 253 which was the sponsoring lodge.

During the annual communication of the Grand Lodge held in April 1989, the Committee on Charters reported that the lodge was able to hold five meetings, was financially sound and had initiated and passed one candidate for the degrees of Masonry. Upon the recommendation of the Committee, the Grand Lodge granted a charter to Tangkulan Lodge and assigned to it number 287.

On September 21, 1989, the new Grand Master, Juan C. Nabong, Jr., opened a Special Communication of the Grand Lodge in the Camp of the 52nd Engineering Brigade and in the presence of a hundred or more Masons and friends of Masons, formally constituted the lodge. After the ceremonies, DDGM Jesus Cellona and WB Pete Guasa installed the charter officers. The installed Master, WB Cabalang, and MW Nabong delivered speeches.