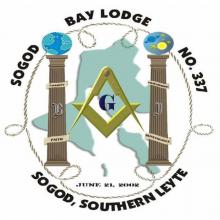 This lodge was named after the town of Sogod, Leyte where it is located. Sogod was founded as a balangay or settlement near the bank of Subang Daku River in the heart of Sogod Bay long before the arrival of the Spaniards. On May 18, 1700 it was officially established as a barrio, then on June 10, 1853 it became an independent municipality by virtue of a decree issued by Governor General Antonio de Urbiztondo.

On December 20, 2000, Grand Master Oscar V. Bunyi issued a dispensation to 24 brethren authorizing them to congregate into a lodge to be known and designated as Sogod Lodge. He designated Jose Lino Aguilar to be the first Master, Winton V. Alvero to be the first Senior Warden and Willy N. Jimenez to be the first Junior Warden of the new lodge. On December 29, 2000 MW Bunyi, with the assistance of Masonic dignitaries, formally instituted the lodge.

In April 2001, the Grand Lodge granted Sogod Lodge a charter and assigned to it number 337. Grand Master Napoleon A. Soriano constituted the lodge on June 22, 2001.