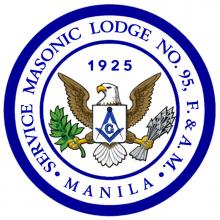 Brethren in the Military Service organized this lodge. The name “service” thus signifies that the members, as men and as Masons, are ever prepared to be of service to country and their fellowmen.

Most of the founders were former members of the defunct Far East Lodge No. 10. Also, a great majority of them were stationed at Ft. Wm. McKinley, but the meetings of the lodge were held in Manila, which in those days posed a problem. As a solution, Masterson purchased a small truck that he sent to McKinley on the date of the meeting of the lodge to bring the members to Manila, returning them to their station after the work was finished. The Master was thus assured of the presence a sizeable number of members during meetings.

On January 27, 1925, the Grand Lodge granted a charter to Service Lodge No. 95, and on February 14, 1925 Grand Master Christian W. Rosenstock constituted the lodge at the Blue Lodge Hall of the Plaridel Masonic Temple. Immediately thereafter MW Newton C. Comfort installed the officers. After the ceremonies , which were private , an excellent lunch was served in the rooms of the Masonic Club below.

Service Lodge drew its membership from servicemen who worked in Nichols field in Manila and the US Navy Yard in Cavite. It had a very big roster, over 200, but when the Second World War broke out, the members rallied to the colors, depleting the ranks of the lodge. After the war, the members managed to reestablish the lodge, but attendance in meetings became a problem, as many of those survived the war relocated to the US. In the mid-60’s a proposal was presented to merge the lodge with Mount Lebanon Lodge No. 80, but the brethren rejected the idea. Bro. Constancio Rebaya, the perennial Secretary of the lodge, then took it, upon himself: to reinvigorate the lodge. He laid the foundation for its present stability.

Two members of Service Lodge have served as Grand Master of the Grand Lodge: Clifford Bennett (1950) and Sidney Austin (1952). The lodge was also chosen as the Most Outstanding Blue Lodge in 1979. At present, it continues to preserve harmony among its members and maintains it charitable activities for the elderly, victims of calamities, paraplegics and schoolchildren, thereby living up to its name "Service." Partly responsible for the success of the lodge are Victor Yu, Elmer Gamiao, Ruddy Tan, Hector Torres, Mike Co, Aniceto Torres and Bobby Go.