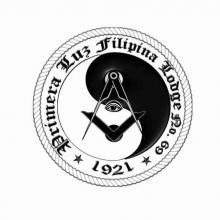 Primera Luz Filipina is Spanish for “ First Light of the Philippines,” which was the name of the first lodge established in the country by Jose Malcampo y Monge at Cavite, under the auspices of the Gran Oriente Lusitano in 1856.

The historian of this lodge informs us that in the evening of November 8, 1919, members of Magdalo Lodge who were residents of Binakayan in Kawit, Cavite, met at the residence of WB Emilio Aguinaldo, also in Kawit, Cavite, to discuss the formation of a lodge in Binakayan. The historian adds that they agreed in principle to organize the lodge and then held an organizational meeting on November 22, 1919 at the house of Mr. Rufino Geluz where they decided to name their lodge Primera Luz Filipina.

For unknown reasons no immediate steps were taken by the organizers to implement their decision. The records of the Grand Lodge show that as of January 1921 the lodge had not yet been established. In that month, however, some 21 Brethren led by Felix Cajulis, Benedicto Ilano, Vicente Marquez, Daniel Sambong, and Esteban Rodriguez, Sr., all members of Magdalo Lodge No. 31 in Kawit, Cavite, demitted from their lodge with the intention of forming a new lodge in Binakayan, Kawit, Cavite which would bear the name Primera Luz Filipina Lodge. Unfortunately, they demitted only a few days before the start of the annual communication of the Grand Lodge, because of which they were unable to secure a dispensation from the Grand Master. Nonetheless, because of their known high Masonic character, the Committee on. Charters earnestly requested the Grand Lodge of the Philippine Islands to grant them a charter even though they had not yet formally worked under Dispensation. The Committee argued that the proposed Worshipful Master; Felix Cajulis, was a Past Master of Magdalo Lodge No. 31, and the other officers and members were all well-known to the Fraternity. As requested by the Committee, a charter was granted to Primera Filipina Lodge No. 69 on January 25, 1921. Thus, Primera Luz Filipina became one of only a few lodges under Philippine jurisdiction to be granted a charter without first securing and working under dispensation. It also has the distinction of being the first lodge to be established in a barrio.

On February 19, 1921, Grand Master Edwin E. Elser, assisted by Newton Comfort, Christian Rosenstock, Julian Balmaceda, Donato Virata, Manuel Paredes and other Masonic dignitaries, convened a Special Communication of the Grand Lodge inside a movie theater in Binakayan, Cavite for the purpose of constituting Primera Luz Filipina Lodge and installing its officers. The ceremonies were public and attendance was about 1,300. After the ceremonies addresses were made by Emilio P. Virata in English, by Gen. Pantaleon Garcia in Tagalog and by Worshipful Master Felix Cajulis in Spanish.

The lodge had one very big handicap. Binakayan was the ancestral home of the members, but a large number of them lived, had business interests, or worked elsewhere. Thus, for example, its Master up to 1923, Felix Cajulis, gave his address as Juan Luna, Manila; Mariano Chico, the Master in 1924 had his address at Plaza Dilao, Paco Manila; Lope Sayo ,the Master in 1925 and 1930, was from Sande, Tondo, Manila; Vicente Marquez, Master in 1926 gave his address as P. Zamora Street, Cavite; its Master in 1928, Amado Evangelista, was from Tondo, Manila; Filemon de Dios, Master in 1931 and 1935 was from Lico, Manila and Pablo Samson, Master in 1933, listed his address as A. Rivera, Manila. About the only member whose address was in Binakayan was Leon Manalo, Master in 1927. In spite of the handicap, however, Primera Luz had a steady, although not so spectacular existence. It had on its roster a respectable number of members throughout the pre-war years. Thus, in 1925 it had 47 members, 49 in 1927; 35 in 1937, 41 in 1938 and 56 in 1940.

The first meetings of the lodge, when it still did not have a Temple, were held in the residence of Bro. Rufino Geluz of Bisita, Binakayan.

Early on, the construction of a Temple was the dream of the members. In the 1920's they formed the Binakayan Masonic Temple, Inc. whose sole objective was to acquire a lot and erect a Temple thereon. After the shares of the corporation were sold, a lot situated along the MRR "tranvia" line near the cemetery was purchased and soon thereafter construction of the Temple was started in earnest. The work on the Temple was a labor of love with the brethren doing most of the work under the supervision of Bro. Lope Sayo who was the architect of the work. The building was completed in late December 1922 and the lodge transferred to the new Temple in January 1923 where the first labor performed was the holding of Masonic Funeral Rites over the remains of Bro. Cipriano Apostol.

After being closed because of the Second World War, Primera Luz Filipino Lodge was reactivated shortly after peace was restored in Cavite by Bonifacio Gutierrez, Agustin Villanueva, Buenaventura S. Realica, Florentino S. Bautista and Francisco C. Ferree. On July 21, 1946, it had the honor of hosting the first post war annual convention of Cavite Masons that was attended by more than 200 brethren. In the years thereafter membership in the lodge shot up, reaching over two hundred.

The members of Primera Luz Filipino Lodge are proud that their lodge is one of the few lodges in the jurisdiction that has an appendant organization under its sponsorship. Masonic District No. 10 in 1979 originally sponsored Tierra Alta Assembly No. 4, International Order of the Rainbow for Girls, but due to lack of support from the other lodges in the District, Primera Luz Filipino took it upon itself in 1986 to take the Assembly under its wing. Members of the lodge are also active in Tierra Luz Court No. 33 of the Order of the Amaranth. When the Court was constituted on August 12, 1995, Honored Lady Airene Perez and Bro. Edgardo C. Perez, a Past Master of the lodge, were installed as its first Royal Matron  and Royal Patron, respectively.

Another source of pride among the members is the quality of the roster of the lodge. Among those who have graced its rolls are: WB (Gen.) Clemente P. Mariano, Chief of Staff of the Armed Forces of the Philippines, 1996-97, Provincial Governors Juanito R. Remulla and Dominador Camerino, Congressman Jose T. Cajuns, Con-Con Delegate, Alberto M. Jamir, DDGMs Edgardo C. Perez, David C. Marquez, Angel 0. Dario, Nelin S. Pineda, and Rogelio T. Manuto, and Vicente K. Gan who was chosen as the Most Outstanding Master Mason in 1984.