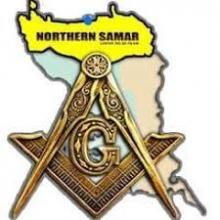 Called "Balicuatro" when it was still under dispensation, this lodge was later renamed Northern Samar Lodge after the province where it is situated. Balicuatro is a district in Samar consisting of several towns and islands, including the town of Allen which was the first seat of the lodge. The lodge now meets in Catarman, outside the Balicuatro district.

The great light of Freemasonry was brought to the shores of Northern Samar when VW Valerio Rovira was assigned as Judge of the Court of First Instance of the province in 1963. During his stay, he searched for fellow travelers and found Bro. Celerino Tobes, a Master Mason, and Bro. Sergio S. Castillo, a fellowcraft. He nurtured the two to become proficient in the labors of the Craft. They later formed the nucleus of the Masons in the area and who sparked a clamor to form a lodge where members of the Craft could meet regularly.

With the transfer of VW Rovira to Iloilo, the plan was put on hold. However, the idea as conceived by VW Rovira was not forgotten. WB Conrado B. Cabuatan, Manager of the Philippine National Bank, Catarman Branch, picked up from where VW Rovira left off and thereafter proposed a joint meeting with the brethren of Mt. Huraw Lodge No. 98 to rekindle the idea of establishing a sister lodge.

Twenty-four (24) of the signatories to the petition for dispensation were from Mt. Huraw No. 98 and were led by VW Francisco Ilagan, Sr. While the petition was in process, however, WB Conrado Cabuatan was transferred to another branch of the Philippine National Bank. But this did not hinder the proposal as it was favored by the assignment of Bro. Natalio Amarga as CFI-Judge to succeed Judge Rovira and by a resolve of WB Francisco Tan, Sr. to make Catarman his residence.

On September 10, 1975, Grand Master Teodoro V. Kalaw, Jr. issued a dispensation authorizing the formation Balicuatro Lodge U.D. and named WB Francisco Tan, Sr., as its first Worshipful Master; Bro. Celerino Tobes, as its first Senior Warden; and Bro. Natalio Amarga, as its first Junior Warden. On December 12, 1975 the lodge was formally organized and its first stated meeting was held. The members passed a Resolution changing the name of the lodge to Northern Samar Lodge.

To-date the members of Northern Samar Lodge No. 211 have not yet put up their own Temple. They started holding their stated meetings at the Chinese School and later in the house of Bro. Eddie Tan. After typhoon Dinang in 1985, meetings were moved to the house of Bro. Alberto Lim III, and presently meetings are held at the UCCP Church. However, the members have a strong determination to construct a Temple even of light materials only. The site has not been selected although there are members who are willing to donate land for the Temple of the lodge.

Membership is greatly affected by the transfer, death and suspension of members. But it is the denial of funeral rites by the Catholic Church of Catarman, Northern Samar to WB Francisco Tan, Sr. that has discouraged others who desired to join Freemasonry because of fear that this may also happen to them should they decide to join the craft.