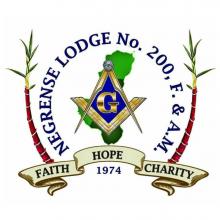 Negrense is a term used to refer to natives of Negros Island. This lodge has its seat in Bacolod City in Negros Occidental.

In the later part of 1973, a group of younger members of Kanlaon Lodge No. 64, banded together to form a new lodge in Bacolod City. Thirty-six in number, they were led by Franklin J. Demonteverde, Alfredo Azcona, Roberto M. Montinola, Emilio Jison, Jr. Roem G. Agustin, Amando Alcantara, Roque B. Leonides and others. After several meetings, they finalized the Constitution and By-Laws of their proposed lodge and requested the Grand Lodge for a dispensation that would authorize them to congregate as a lodge. On December 20, 1973, a very pleased Grand Master Ruperto S. Demonteverde, Sr. issued the requested dispensation and designated his son, Franklin, to be the Dispensation Master, Roem 0. Agustin to be the Senior Warden and Harry S. Ano to be the Junior Warden of the new lodge that would be named Negrense Lodge. On the 26th of the same month, the lodge was formally organized and immediately went to work. Meetings were held at the Masonic Temple at Luzuriaga Street. Before the annual communication of the Grand Lodge was held in April 1974, the lodge was able to hold monthly meetings without fail, plus seven special meetings for degree conferrals. The lodge initiated five candidates and passed and raised all of them to the Sublime Degree of Master Mason. The Committee on Charters found that the lodge had a membership of 33 Master Masons and was in a sound financial condition. Based on the performance of the lodge, the Grand Lodge granted it a charter on April 26, 1974 and assigned to it number 200.

Today Negrense Lodge No. 200 is one of the healthy lodges under the Grand Lodge. It has over fifty members, one of whom, its first Worshipful Master, was elected Grand Master of Masons in 1999. Among its members may be counted Jose Alunan, Jr., WB Aquiles Ascalon, Jr., Samuel R. Bacuteng, Melvin L. Cabrera, Benjamin G. Castaneda III, Bienvenido M. Celiz, VW Magno E. Carlitos, VW Melvin S. Jurisprudencia, and WB Jose R. Conado.

Negrense Lodge meets at the Bacolod Masonic Temple, which is also the meeting place of Kanlaon Lodge No. 64 and Manuel M. Abello Memorial Lodge No. 260.