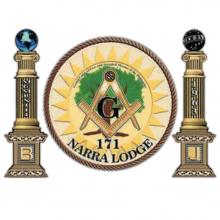 This lodge was named after the narra tree (pterocarpus indicus) which is the national tree of the Philippines. Renowned as one of the world's best hardwoods, it can be seen in the forests in majestic heights reaching 25 meters or more with a crown adorned with golden flowers and a massive trunk clothed with a soft grayish bark.

A creation of the brethren of Memorial Lodge No. 90 in Munoz, Nueva Ecija under the able leadership of WB's Buenaventura Eugenio and Basilio Ng Tian Kee, Narra Lodge No. 171 was issued a dispensation by Grand Master Pedro M. Gimenez on August 22, 1963 and was granted a charter by the Grand Lodge on April 29, 1964.

In barely five years, the lodge was able to construct its own Temple. The cornerstone laying and consecration of its Temple was performed on April 6, 1969 and its final dedication done on February 7, 1970. The Temple was erected on a 1,000 square meter lot that was donated by WB Basilio Ng Tian Kee.

Situated in the heart of San Jose City, Nueva Ecija where Masonry's tenets throb with vigor and vitality, Narra Lodge has since been functioning as a steady bulwark of the Fraternity's ideals in that part of Nueva Ecija.