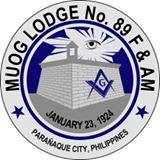 Muog is a Tagalog word signifying "bulwark," fortress", "tower of strength." This name has been applied to the town of Paranaque, because it served the Filipino patriots as a bulwark against the Spanish forces.

After several caucuses held at the residence of Eulalio Monsod, they held an organizational meeting on St. John's Day, June 24, 1923, in the house of Mr. Bernardo Custodio in Dongalo. The meeting was also attended by members of the following neighboring lodges: Pintong Bato Lodge No 51, Batong Buhay Lodge No. 27, Magdalo (now Gen. Emilio Aguinaldo Niemorial Lodge) No. 31; Walana Lodge No.13, Dapitan Lodge No. 21, Labong Lodge No. 59, Taga-Ilog Lodge No. 79, and High Twelve Lodge No. 82. On July 16, 1923, Grand Master Frederic H. Stevens issued a dispensation authorizing them to organize a lodge in Paranaque. The following year, on January 23, 1924, the Grand Lodge granted Muog Lodge a charter.

On March 29, 1924, Grand Master Wenceslao Trinidad, assisted by Quintin Paredes and other Masonic dignitaries, opened a Special Communication of the Grand Lodge in the Paranaque Elementary School in Paranaque, Rizal for the purpose of constituting Muog Lodge. The ceremonies were public and the attendance was in excess of the capacity of the building. After the constitution of the lodge, the officers led by the Master, Sabas de Guzman, were installed into office.

During the Second World War, the Japanese troops from the South were also stopped at the Parañaque bridge and had to wait for two days before the were could proceed to Manila. Likewise, the American liberation forces coming from the South on February 5, 1945 had to establish their headquarters first in Parañaque, south of the river, and wait for days before making their march to the city.