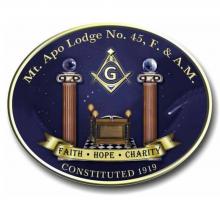 Mount Apo is the name of a non-active volcano in Mindanao, 2965 meters high, the highest point in the Philippines. Apo means "lord" or "master" in many of the Philippines tongues. Mt. Apo has inspired a charming mythology among the Bagobos, who have lived in its neighborhood since ancient times. To this day, these tribes regard the volcano in fear and awe as the dwelling place of demons that they call buso

Mt. Apo Lodge started as a sojourner's club formed by U.S. Army and Navy personnel stationed in Pettit Barracks and American civilians who were residing in Zamboanga City. In 1918, one year after the unification of Philippine Masonry, the members of the club petitioned the Grand Lodge for a dispensation to establish a lodge. On February 6, 1918, Grand Master Manuel L. Quezon issued the requested dispensation and on January 28, 1919 the Grand Lodge granted Mt. Apo Lodge a charter as Lodge No. 45. On April 7, 1919, Mt. Apo Lodge was formally constituted and its officers, headed by its Master, James J. installed. Among the Grand Officers who participated in the ceremonies of constitution were Grand Master Milton E. Springer, Teodoro M. Kalaw who acted as Deputy Grand Master, Manuel X. Burgos who acted as Senior Grand Warden and Teopisto Guingona who acted as Senior Grand Deacon.

Among the prominent Masons who were members of the lodge may be counted MW Juan S. Alano, MW Jose Araneta, Col. Henry Gilhouser, and Gen. Carlos C. Aguilar