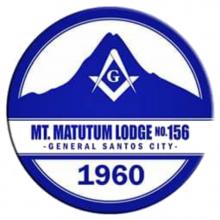 The lodge is named after Mt. Matutum, a dormant volcano 2293 meters above sea level, located not far from the seat of the lodge. At the top of the volcano is a 120-m deep and 320-m wide crater, breached by three gorges and covered with dense growth.

Matutum in the local dialect means, "has fired or burnt out."

Sometime in 1960, five young dedicated professionals, namely Dr. Bienvenido Garcia, Health Officer of Tupi, Cotabato; Dr. Sandoval, a dentist from Koronadal; two Military Officers from the Philippine Constabulary, namely, Captain Francisco Sarrosa, Station Commander of Bauayan, and Major Jesus Robleza, and Juan T. Talim, Sr., a businessman, decided to join the Masonic fraternity through Kutang Bato Lodge No. 110 at Cotabato City. They filed their applications together and, after almost two months, were informed of their acceptance and of the scheduled date of their initiation. Together they were initiated, passed and raised in due time.

After they were raised as Master Masons, the five initiated a plan to organize a lodge in General Santos City which at that time was called Buayan. They contacted men in the city who were known to be Freemasons, namely Jethan and Balani, David Clina and Judge Jesus Quintillan, the Judge of the First Instance. Encouraged by the enthusiasm of their responses, the five organizers asked for assistance from the members of their mother lodge, Kutang Bato Lodge No. 110. WM Dalmacio Enrique and other brethren of Kutang Bato Lodge 110 helped them prepare a petition for the issuance of a dispensation.

In 1963, the petitioners received a communication from the Grand Lodge signed by Grand Secretary Esteban Munarriz informing them that the Grand Lodge was receptive to their plan to found a lodge and suggested that they revive Mt. Matutum Lodge No. 156, a dying lodge at Tacurong, Cotabato which was given a dispensation on May 7, 1959, chartered on April 28, 1960 and constituted on October 17, 1960. The petitioning brethren agreed to revive Mt. Matutum Lodge but requested that it be relocated at Buayan and that a new set of officers be elected. Grand Master William H. Quasha granted the request and by October 17, 1963, Mt. Matutum Lodge No. 156 was reorganized and installed in the town of Buayan, South Cotabato, now Gen. Santos City, with Jesus Quintillan as Worshipful Master, David Calina as Senior Warden, Bienvenido Garcia as Jr. Deacon, Alabado as Chaplain and Bro. Manila as Tyler. The rest of the appointed officers were taken from the brethren of Kutang Bato Lodge No. 110. Grand Master Quasha and other officers of the Grand Lodge installed and reconstituted the lodge.

Such is the humble beginning of Mt. Matutum Lodge No. 156 in Gen. Santos City. From the original five men, it has grown to be one of the most, if not the most sought after fraternal organization in the region where men of goodwill seek to be admitted.