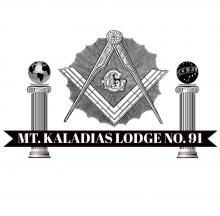 This Lodge is named after a mountain in Negros  visible from Dumaguete City where the lodges is located.

On November 6, 1923, Grand Master Frederic H. Stevens signed a dispensation authorizing various M0aster Masons from different lodges to open a lodge, to be called Mount Kaladias, in the town of Dumaguete, Negros Oriental.

The founders of the new lodge were: Gregorio B. Almazan of Isarog Lodge No. 33; Espiridion Villegas, Severo Eugenio Lo, Jose Pineda, and Ricardo Luna of Iloilo Lodge No. 11; Vicente Q. Colina, Ramon Catalla, Pedro Malajacan, Daniel Sindiong and Marcos M. Morelos of Maktan Lodge No. 30; Mariano Caraza of Acacia Lodge No. 78; Clyde V. Powers of St. John's Lodge No. 9; Herminigildo Villanueva of Nilad Lodge No. 12; and Santiago Ramos of Makabugwas Lodge No. 47.

In January 1924, the Grand Lodge of the Philippine Islands granted a charter to the lodge under the name and number Mount Kaladias Lodge No. 91. The following April, Past Grand Master Frederic H. Stevens, who was then in Cebu on a visit, promised to personally constitute the lodge. He, however, encountered difficulties in securing transportation. Fortunately, Bro. Severo Lo arrived in Cebu on his good ship Hoiching and placed his vessel at the disposition of Stevens and his party. He kept the ship at the dock for twelve hours just to ensure that Stevens could make the trip. On arrival at Dumaguete, Stevens and his party were met by Bro. Gregorio Almazan, Bro. Clyde Powers and a committee of Masons from the province. At noon of April 11, a luncheon was given in honor of the visiting party and in the afternoon, at five o'clock, the constitution of Mount Kaladias Lodge took place in the garden of the Provincial Building. The officiating officers were, as follows: Stevens, as Grand Master; RW Valeriano Segura, as Deputy Grand Master; Eulalio Tanedo, as Senior Warden; and RW Ricardo Ponce, as Junior Grand Warden. The installed lodge officers were: WB Gregorio Almazan, Worshipful Master; Bro. C. V. Powers, Senior Warden; Bro. Daniel Sindiong, Junior Warden; Bro. Pedro Cecilia, Treasurer; and Bro. Candelario A. Gonzales, Secretary.

In the evening a dance was held and at 10:30 the party left on the SS Albay en route to Cebu.

Many prominent citizens in the locality have graced the roles of this lodge. One member of this lodge, Emilio Javier, run for Vice-President of the Philippines in the national elections held in 1941 but he and his running mate, Juan Sumulong of Bagumbayan Lodge, were defeated by Manuel L. Quezon  and Sergio Osmeña.