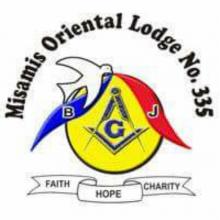 This lodge is named after the province of Misamis Oriental where it is located. Misamis comes from the Subano word "Kuyamis," a local variety of sweet coconut. Some say it comes from the Spanish word "Misa," meaning mass. They  claim that when the people were converted to Christianity, they invariably shouted "misa" whenever they saw a priest coming. Over a period of time, the Spanish Missionaries called the province "Misamis."

Misamis Oriental was created in 1929 when Misamis was divided into two provinces. It is bounded on the north by Macajalar Bay and the Bohol Sea; on the west by Iligan Bay; on the south and southwest by the provinces of Bukidnon and Lanao del Norte; and on the east by Agusan del Norte.

Sometime in February 2000, during the monthly fellowship meeting of the members of Cagayan de Oro Lodge No. 298, WB Danilo P. Lagbas, of Don Antonio T. Cosin Memorial Lodge No. 308, requested the brethren gathered to assist him in putting up a new lodge for the towns of Balingasag and Medina in Misamis Oriental. Most of the brethren present in that fellowship responded positively and expressed their desire to be petitioners in the lodge to be formed. Among the brethren who actively participated in planning the formation of the new lodge were: VW Stephen S. Lim, VW Francisco T. Lim, WB Danilo O. Chua, Bro. Noel B. Vedad, WB Robert A. Cruz, VW Leonardo M. Arcol, Bro. Roy L. Salcedo, Bro. Peter R. Gaquit, VW Bonefebe D. Leyson and VW Ildefonso G. Agbuya. After securing the favorable recommendations of Cagayan de Oro Lodge No. 298, Carmen Valley Lodge No. 250 and Don Antonio T. Cosin Memorial Lodge No. 308, they sent a petition for the issuance of a dispensation
to the Grand Lodge, signed by 69 Master Masons. On March 29, 2000 Grand Master Franklin J. Demonteverde issued the requested dispensation. This paved the way for the institution of the lodge on June 3, 2000 by MW Oscar V. Bunyi at the Maguindanao Masonic Temple in Cagayan de Oro City. The following officers were also installed: WB Danilo P. Lagbas, Worshipful Master; Bro. Roy L. Salcedo, Senior Warden; and Bro. Peter R. Gaquit, Junior Warden. On that day also, Cornerstone Laying Ceremonies of the future site of Misamis Oriental Lodge in Sugbongcogon, Misamis Oriental was held.

On April 27, 2001, the Grand Lodge, upon the recommendation of the Committee on the Administration of Lodges, Returns and Charters headed by Assistant Grand Secretary Mario Q. Angeles, granted a charter to the lodge as Misamis Oriental Lodge No.335. Two months later, on June 9, 2001, dignitaries of the Grand Lodge enplaned for Cagayan de Oro to constitute the lodge and install its first set of officers under charter.

Misamis Oriental Lodge had a running start. On July 11, 2000 it initiated its first candidates, Michael John Paul Benito K. Labao and Kenneth Mark B.  Tan. Barely two months later, on September 19, 2000, it conferred the 3rd degree on one of the two, Michael Labao. Likewise, in record time, the lodge was able to raise 24 Masons to the Sublime Degree of Master Mason.