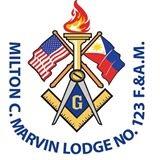 On July 16, 1948, Grand Master Albert Brazee issued a dispensation to several brethren authorizing them to organize a lodge in or around Agana, Guam, in the Marianas Islands, to be known and designated as Armed Forces Masonic Lodge. This brought the number of lodges working in Guam to three.

On January 26, 1949, during the annual communication of the Grand Lodge, it granted a charter to Armed Forces Masonic Lodge and assigned number 123 to it. In due time the lodge was constituted and held its regular meetings at Camp Edusa, Dededo, Guam.