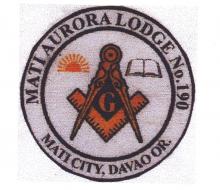 This lodge was named after the town of Mad, in the province of Davao Oriental. The members added "aurora" which means dawn, because the sky at sunrise in Mati is exceptionally beautiful. Mad comes from the native word "maati," meaning a small creek which easily dries up during the summer months.

In 1968, thirty-one Master Masons who were mostly residents of Davao City and members of Sarangani Lodge No. 50 agreed to organize a Masonic lodge in the town of Mad, some 157 kilometers east of Davao City, then the political seat of Davao Province. Grand Master Joseph E. Schon issued to them a dispensation on November 20, 1968 and thiring the annual communication of the Grand Lodge in April 1969 the lodge was granted a charter and assigned the number 190.

From the inception of the lodge up to 1976, brethren from other lodges had to travel over rough and rugged roads just to assist in the degree work of the fledgling lodge. But its growth was firm and steady; by 1976 it was already performing the degree work all on its own.

The lodge initially operated as an itinerant lodge. In 1984 it started construction of its own building on a 1409 sq. m. lot donated by Bro. Leopoldo N. Lopez, then Governor of Davao Oriental, whose devotion to Masonry is worthy of emulation. VW Edgardo E. Lopez, PDDGM, another member of the Lopez clan and nephew of the Governor, unselfishly spearheaded fund-raising projects through the facilities of the families' movie house. Other brethren, most notably WB Alberto Ravelo and VW Cirilo R. Valles, also spent precious time in seeing the temple to its completion. Finally, Grand Master Rosendo C. Herrera dedicated the Temple on March 13, 1984.

The lodge has withstood the test of time and the present members have transcended the barriers of the recent past. With the dawning of a new era, Mati-Aurora Lodge No. 190, fervently hopes to carry on the torch of Masonry in the decades to come.