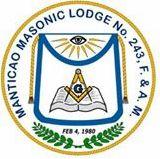 Named after the town of Manticao in Misamis Oriental, where the lodge is located.

Manticao comes from "mantica," the native word for pork lard. It is said that in the olden days, Moro pirates frequently pillaged the village, which is now known as Manticao, for food and women. Knowing the Moro's aversion to pigs, the villagers killed their swine, extracted lard from them and instructed their women to bathe themselves in the lard whenever the Moro pirates attacked. When a raid was staged, the Moro's recognized the ointment on the skin of the women. They shouted to them, "Mantica icao" and left the women unharmed. Since then the village has been called "Mantica icao" or "Manticao" for short.

Manticao Lodge No. 243 was organized by forty-five Master Masons. On February 4. 1980, Grand Master Jolly R. Bugarin gave them a dispensation to organize a lodge in Manticao, Misamis Oriental and on February 23, 1980 they formally opened the lodge. At the annual communication of the Grand Lodge in April 1980 the lodge was granted a permanent charter upon the recommendation of the Committee on Charters and was assigned number 243.

On September 13, 1980, a Special Communication of the Grand Lodge was opened in Manticao, Misamis Oriental for the purpose of constituting Manticao Lodge No. 243. Immediately thereafter the following officers of the lodge were installed into office: Bro. Glicerio Lim, Jr., Worshipful Master; Bro.
Nestor Abijay, Senior Warden; and Bro. Johnito Bajuya, Junior Warden. Under the administration of WB Nestor Abijay, the lodge transferred the venue of its stated meetings to the Ubaldo Laya Masonic Center in Iligan City since a majority of its members were residing in that area.

On November 14, 1984 the cornerstone of the proposed Masonic Temple of the lodge was laid in ceremonies that were presided over by Grand Master Reynato S. Puno, with the assistance of Masonic dignitaries.