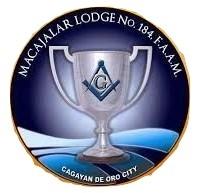 Macalajar is the name of the beautiful bay nestling along the shoreline of Cagayan de Oro City and Misamis Oriental. Its clear blue sea is one of the richest fishing grounds in Northern Mindanao.

As early as 1964 a group of well-meaning brethren conceived the idea of forming a new lodge in Cagayan de Oro City and held a series of informal gatherings to discuss its formation. Among those who attended the gatherings were Dionesio Q. Erfe, retired Provincial Auditor; Gaspar Angeles, BIR Regional Director; Esteban Sarmiento, Division Superintendent of Schools; Sixto Tadeo, Provincial Treasurer and Melquiades P. Varias, Division Auditor. At a meeting held on July 10, 1965 they elected the following to be the officers of the proposed lodge: Clemente Batan, Master; Florentino Almacen, Senior Warden; and Pedro W. Guerzon, Junior Warden.

After the founders secured the favorable endorsement of Maguindanao Lodge No. 40 they petitioned the Grand Lodge for a dispensation. On October 6, 1965, Grand Master Serafin L. Teves issued the dispensation and on January 6, 1966 the lodge was formally organized. The lodge met regularly, but it failed to submit a report on its activities in time for the annual communication of the Grand Lodge held in April 1966 so it was not granted a charter that year. Nonetheless, the Grand Lodge extended its dispensation for another year. At the annual communication of the Grand Lodge in April 1967, Macajalar Lodge was granted a charter and assigned the number 184. On July 15, 1967, Grand Lodge officers led by Grand Master Mariano Q. Tinio, constituted macajalar Lodge No. 184, installed its officers and formally presented its charter in simple but solemn and impressive ceremonies.

The lodge has organized the Macalajar Masonic Temple Association and acquired a 500 sq. m. lot. In 1990, it established the Macalajar Lodge Scholarship Foundation which supports poor but deserving students. It also started the Brother Love Fraternal Association Project to ensure assistance to the widows and orphans of its brethren who have since gone to the Great Beyond.