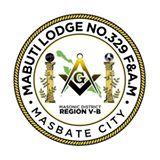 This lodge was named after a lodge of the same name (Ma-Bu-Ti Lodge No.92) that existed in Masbate before the Second World War. The term Ma- Bu-Ti was coined from the first syllables of the three principal islands of the province, namely Masbate, Burias and Ticao.

For many years, the Masons in the Bicol region dreamt of reviving Masonry in the Province of Masbate. Their dream was realized when 29 members of Bulusan Lodge No. 38 and Mayon Lodge No. 61 led by Maximino R. Ables, Eddy W. Tan, Ireneo B. Escandor, Rogelio C. Lee, Josue F. Ernacio and Leopoldo D. Andal filed a petition with the Grand Lodge on October 20, 1998 asking that they be given a dispensation to form a lodge in Masbate, Masbate to be called Ma-Bu-Ti Lodge. On December 12, 1998, Grand Master Enrique L. Locsin issued the requested dispensation and named Maximino R. Ables as the Dispensation Master, Jose Nelson D. Doloiras as the Senior Warden and Eddy  W. Tan as the Junior Warden. On the same day, December 12, 1998, Grand Master Locsin, with the assistance of Masonic dignitaries, instituted the lodge.

On April 23, 1999, during the annual communication of the Grand lodge it granted a charter to the lodge and assigned to it number 329. On May 15, 1999, RW Napoleon Soriano, upon the directive of Grand Master Franklin J. Demonteverde constituted the lodge and installed its first set of officers, to wit: Maximino R. Ables - Worshipful Master; Ernesto T. Valencia - Senior Warden; and, Marlon Francia - Junior Warden.