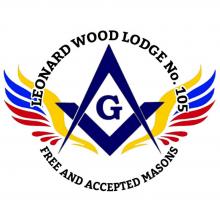 This lodge was named in honor of Gen. Leonard C. Wood, Governor General of the Philippines from 1921-1927. Wood was a member of Anglo Saxon Lodge No. 137. He also joined the York Rite and Scottish Rite and was a Shriner.

The choice of the name of the lodge could have been influenced by the fact that it was organized only a little over a year after Wood's death.

Leonard Wood Lodge No. 105, was organized in Fort Stotsenberg in Angeles, Pampanga under a dispensation issued by Grand Master Teodoro M. Kalaw on January 15, 1929. Prior to its organization, American military personnel who took part in Masonic activities were forced to make the arduous journey to Manila, which in those times required days under ideal conditions.

Leonard Wood Lodge was granted its charter in January 1929 and on June 1, 1929 officers of the Grand Lodge, under the direction of the Grand Master Selden W. O'Brien, formally constituted it in Fort Stotsenberg, at the Lodge Hall which was at that time located on the second floor of the Headquarters Building, 26th Cavalry Regiment. Immediately thereafter, Senior Grand Warden William Q. Larkin installed the officers.

The Worshipful Master of Leonard Wood Lodge during its first year of life was 1st Lt. Doyle 0. Hickey. He would serve again as Master ten years later in 1939. Hickey rose to prominence in World War II and at the time of his retirement held the rank of Lt. General. He was assigned to the Staff of Gen. Douglas MacArthur in Tokyo and graciously entertained the officers of the Grand Lodge whenever they visited the Philippine lodges in Japan.

The chaos of the war in the Philippines forced Leonard Wood Lodge into inactivity. Its Acting Master at the outbreak of the war, Lt. Colonel Clinton A. Pierce (SW), commanded the remnants of the 26th Cavalry Regiment in the defense of Northern Luzon, after the evacuation of Clark Field and Fort Stotsenberg.

In the latter part of 1947, a group of Master Masons living on Clark Air Base (as the installation was by then renamed) assembled and petitioned the Grand Lodge for a dispensation to reactivate Leonard Wood Lodge No. 105. The petition was honored and a dispensation to meet was issued shortly thereafter.

During the first year following its reactivation, Leonard Wood Lodge held its meetings in a vacant barrack structure in what was formerly Camp Dau. This meeting place, however, was not satisfactory for a number of reasons. The officers of the lodge determined that if the lodge was to survive, they had to create a permanent home for the members to meet. Accordingly, and under the guiding hand of Brother Warren J. Ballou, they planned the building of a Temple of their own. They chose the site of a former power plant, which had been reduced to rubble during the fighting in this area. Nothing remained of the structure save for a few reinforced concrete columns, which they decided to build around. Permission to build was obtained from the local military authorities. The members ordered the structural steel materials and began the long time-consuming task of making, seasoning and drying the many concrete blocks which would be needed for walls and other construction purposes. One by one they produced these blocks in a single forming machine, which required each block to be shaped, molded and tamped by hand. Working in the afternoons after duty and later installing temporary lighting to enable the work to proceed by night, they labored to erect this lodge on Clark Air Base. The result of this labor produced a beautiful Lodge Hall, which was often referred to as The Pillar in the East.

The Temple was finally dedicated on the 11th of December 1948 and served as the meeting place for the Leonard Wood Lodge No. 105 for 24 years. Masons from all over the world who came to visit in this great lodge proclaimed it to be one of the most beautiful lodges they had ever seen anywhere.

On July 4, 1972, the Master of the lodge announced at the Stated Meeting that the Base Commander had issued an order for them to vacate the building prior to August 15, 1972. The Master, Worshipful Brother William H. Marquardt, sensing the anger and protest from the members on having to leave this beautiful lodge, demanded that no one would say or do anything which would discredit the Masonic standard or bring shame to the fraternity. The last meeting on base was held on August 1st, and the building was vacated by August 15, 1972.

The lodge held its meetings in some of the member's homes and at the Oasis Hotel. WB Marquardt appointed a building committee to find a new site in which to build a new Temple. This committee was chaired by WB James N. Annas with WB Julian D. McElroy, WB Edgardo A. Ramos, WB William H. Marquardt, WB Alfred Adrian, WB William C. Lyons and Bro. Paul A. Lee as its members. They found a suitable site and began the construction of another Temple for the lodge. Through a lot more hard work, the brothers of Leonard Wood Lodge No. 105 again built one of the most beautiful lodges anywhere in the world.

In 1991 ash-fall emitted during the eruption of Mt. Pinatubo brought down the roof of the lodge and almost buried everything underneath. The "Labor of Love" started all over again. Started in 1999 during the term of WB Armin D. Tinio, the renovation was finished the following year. In January 2000, the lodge was blessed and inaugurated. The Temple is again a source of pride to the brethren of Leonard Wood Masonic Lodge.