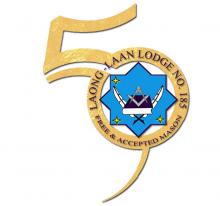 Laong Laan is the pen name of Dr. Jose P. Rizal. "Laong" is a Tagalog word meaning "a long time," while laan," means "reserved for a purpose." Laong Laan thus means "kept in reserve for a purpose for a long time."

The formation of a fourth lodge in Quezon City, (the first three being Quezon City Lodge No. 122, Rafael Palma Lodge No. 147 and Capitol City Lodge No. 174) was the brainchild of WB Dominador C. Vicente, who envisioned to provide a lodge for Masons residing in the burgeoning Projects 2, 3, 4, Cubao, Kamias, Murphy and the other adjoining districts of Quezon City.

The lodge was organized on May 7, 1966 and Grand Master Raymund E. Wilmarth issued the founders a dispensation on May 11, 1966. In April 1967 the Grand Lodge granted the lodge a charter and assigned to it the number 185. On July 1, 1967, Grand Master Mariano Q. Tinio constituted Laong Laan Lodge No. 185 as a regular lodge. On the same day, VW Manuel M. Crudo installled the first three lights, namely, Inocencio F. Dumlao, Lazaro C. Vicente and Mario C. Navia as Worshipful Master, Senior and Junior Wardens, respectively.

Much like the three other lodges in Quezon City, Laong Laan Lodge was an ambulant lodge for five years until in 1971 when it finally found its permanent home at the Capitol Masonic Temple together with the three other lodges earlier mentioned. Among the illustrious sons of this lodge are MW Teodorico V. Baldonado, PGM; RW's Domingo F. M. Domingo, Grand Secretary; Bernardino C. Cabading, PJGL; Emilio A. Andrion, Jr., two-term DDGM, Irineo P. Goce, Cabletow Filipino Section perennial contributor, Ernesto Malapaya, PSGL, and many others who managed to serve the Grand Lodge in various capacities. Santiago Toledo, NBI Director, also passed through its proverbial door to learn the mysteries of Freemasonry. Among the other members of the lodge may be mentioned Noe dela Cerna, Johnny Flaviano, Nelson Pacis, Roberto Fajardo, John T. Tong, Billardo H. del Rosario, Generoso R. Cortez and Benjamin delos Santos.

Like other lodges, Laong Laan has had its ups and downs, but at the turn of the millennium, it has proven to be one of the stronger lodges in the whole of Quezon City.