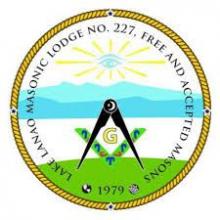 The Name
Named after the largest lake in Mindanao at the edge of which is Marawi City. Its root word is "ranao", meaning lake, where the Maranaos, one of the major Muslim groups in Southern Mindanao, are predominantly settled and who are referred to as "people of the lake". Lake Lanao is 135 square miles in
size and shaped roughly like an isosceles triangle. It fills the depression of a collapsed plateau 2800 feet above sea level. It is drained by the Agus River that has cut gorges on its way and cascades into the Maria Cristina Falls before flowing into Iligan Bay.

The Lodge
The Committee on Charters reported during the annual communication of the Grand Lodge in April 1979, that: "In the history of the Grand Lodge, this lodge has the most number of signers to a petition to form a lodge - 70 Master Masons, most of whom are very well known not only as Masons but as exemplary citizens - professors and public officials."
On October 20, 1978 Grand Master Desiderio Dalisay, Sr. issued the dispensation for the organization of this lodge in Marawi City. The members immediately buckled down to work, and by the time the Grand Lodge held its annual communication in Anril 1979 the lodge had already met eight times and raised eight brothers to the Sublime Degree of Master Mason. Lodge meetings were held at the Mindanao State University Chemistry building thanks to the sponsorship of WB Ali Dimaporo, a two-term Master of Maranaw Lodge No. 111. The members negotiated with the University authorities for a 1,100 sq.m. lot for a Temple. Each member pledged to contribute P1,000.00 and in February 1979 they laid the cornerstone for the Temple. Based on the performance of the lodge, the Grand Lodge granted it a permanent charter on April 27, 1979. On July 6, 1979, the new Grand Master, MW Jolly R. Bugarin, constituted the lodge and installed the following charter officers: Rasuman Macalandong, Worshipful Master; Mansur D. Baulo. Senior Warden; Angelito G. Flores, Sr. Junior Warden.