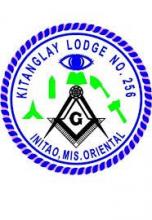 This lodge is named after a tall mountain located at the outskirts of the town of Initao in Misamis Oriental.

The organization of Kitanglay Lodge can be traced to the untiring efforts of the then District Deputy Grand Master Benjamin O. Go, who together with the MW Manuel D. Mandac, envisioned the establishment of new lodges in the western section of the district.

WB Gabino O. Poblete, Bros. Felipe T. Engracia and Daniel N. Maandig started as the nucleus of a proposed lodge in Initao, Misamis Oriental. They convinced 24 other Master Masons who were members in good standing of Maguindanao Lodge No.40, Macajalar Lodge No. 184, Bugo de Oro Lodge No. 220, and Punta Sulawan Lodge No. 242 to join cause with them. After securing the recommendation of Bugo de Oro Lodge and of VW Go, the 27 petitioned the Grand Lodge for a dispensation. On April 27, 1981 Grand Master Simeon Rene Lacson gave them a dispensation to form Kitanglay Lodge in Initao and named Gabino O. Poblete as its Dispensation Master. The founders immediately went to work. During the annual communication held in April 1982, the Committee on Charters noted that the lodge had met fourteen times and had initiated, passed and raised four Master Masons. On the basis of these accomplishments, the Committee recommended that it be granted a charter and assigned number 256. The four who were raised were Dr. Solfe T. Engracia, Engr. Sergio Sitchon, Rudy J. Baluran and Ricardo V. Zayas. The last named brother was raised as a courtesy to Punta Sulawan Lodge No. 242, the lodge
that exerted unselfish efforts in helping Kitanglay Lodge No. 256, particularly in the degree labors.

On July 31, 1982 Kitanglay Lodge No. 256 was constituted, and its officers installed, by Grand Master Rudyardo V. Bunda.

The lodge was still in its infancy when it acquired a lot for its Temple. During its first stated meeting, held on May 26, 1981, Bro. Felipe T. Engracia, Senior Warden, pledged to donate a lot for the lodge and soon thereafter made good his promise. For his benevolence, he was presented with a Diploma of Merit during the Grand Lodge Annual Communication in April 1982. On September 9, 1994, the cornerstone of the Temple was laid in ceremonies presided over by Grand Lodge officials.