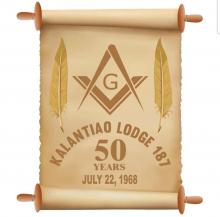 This lodge was named after Datu Bendahara Kalantiao of Aklan, the alleged author of what used to be described as "the second oldest written Code of the Filipino people."

The Code first appeared in a two-volume work entitled "Las Antiguas Leyendes de la Isla de Negros" (The Ancient Legends of the Island of Negros), allegedly written by Fr. Jose Maria Pavon, parish priest of Himamaylan, between 1838 and 1839. In 1914, Jose E. Marco of Ponteverde, Negros Occidental, presented the Leyendes to the Philippine Library. An enthusiastic Library Director, James Robertson, 32°, A. & A. S. R., described it as "the only ancient criminal code of the Filipinos, which has yet come to light." In 1917, Robertson published as English translation. An uncritical public lapped it up and Kalantiao became an instant celebrity. Later, the Philippine Government bestowed the decoration of the Order of Kalantiao on foreign ambassadors upon the termination of their tour of duty in Manila and a postage stamp was issued to commemorate Kalantiao's name. A Kalantiao Shrine was also put up in Batan, Aklan. Kalantiao metamorphosed into a national hero.

In 1968, William Henry Scott undertook serious research into the provenance of the Code of Kalantiao and established before a panel of eminent Filipino historians that the Code is a forgery.

This lodge, the second lodge organized in Iloilo City, traces its beginning to October 23, 1967 when a group of brethren residing in the City and Province of Iloilo received from Grand Master Mariano Q. Tinio a dispensation to assemble as a lodge.

On April 24, 1968, the Grand Lodge gave Kalantiao Lodge a charter and assigned to it number 187. Grand Master Joseph C. Schon constituted the lodge on July 22, 1968 in Iloilo City. VW Valerio Rovira, RW Damaso Tria, WB Gil Octaviano, WB Ponciano Leonidas, WB Teofilo Marte, Leodegario Cells and others assisted him. Immediately after the constitution of the lodge, its officers, led by Francisco I. Jison, Worshipful Master, Romeo Hiponia, Senior Warden, and Rizal R. Quimpo, Junior Warden, were installed into office. A program followed and speeches were delivered by the new Master and the Grand Master, In his closing remarks, MW Schon expressed his feeling that this lodge will one day be one of the most prosperous lodges in the whole island of Panay, with Iloilo-Acacia Lodge No. 11, its mother lodge, serving as a good example. True enough, the lodge has already produced four DDGM's, Panfilo Enojas, Severino Aguilar, Glenn A.M. Catedral and Renato V. Alba. It is the mother lodge of incoming Grand Master Ricardo P. Galvez.