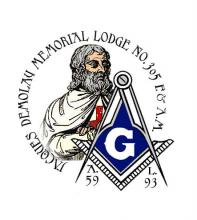 The Name
Named after Jacques DeMolay (1244-1314 A. D.), the last Grand Master of the Order of the Temple, better known as the Order of the Knights Templar, the symbol and personification of all DeMolays. This lodge was organized largely by Senior DeMolays who had joined the Masonic Fraternity.

The Lodge
On December 19, 1991, twenty-five Master Masons addressed a petition to the Grand Lodge praying for permission to organize a lodge at the Scottish Rite Temple in Manila to be named Jacques DeMolay Memorial Lodge. The petition was favorably endorsed by DDGM Rodrigo Arandia, Noli Me Tangere Lodge No. 148 and Saigon Lodge No. 188. Among the petitioners were the debonair Egidio "Gigi" Ancajas, Macario Ramos, Sr., Van Cornelius D. Luspo, Pacifico B. Aniag, Joel Capistrano, Edgardo Delmo, and Roberto V. Manese, most of whom, if not all, were Senior DeMolays. After considerable delays occasioned by the failure of the petitioners to comply with the requirements of the Grand Lodge, Grand Master Agustin V. Mateo issued a dispensation on October 8, 1992, authorizing the petitioners, who in the meantime had increased in number to forty-two to include PGMs Rosendo C. Herrera and Reynato S. Puno and others, to congregate into a regular lodge, known as Jacques DeMolay Memorial Lodge, U.D. MW Mateo designated Evaristo A. Leviste to be the Master. Francisco M. Lovero to be the Senior Warden and Albert K. Tan to be the Junior Warden, of the new lodge.

Grand Master Mateo instituted Jacques DeMolay Memorial Lodge on December 28, 1992 and on the same day the officers of the lodge were installed into office. The lodge had no problem securing a charter from the Grand Lodge during the annual communication held in April 1993. On June 17, 1993, Grand Master Rizal D. Aportadera personally constituted Jacques DeMolay Lodge No. 305 at the Scottish Rite Temple in Ermita, Manila

Today, Jacques DeMolay Lodge is hailed as one of the more dynamic lodges in Metro Manila thanks to the dedication of its young members. Among its ardent and more promising members are WB Jojo P. Javier and Bro. Manny Valloso.