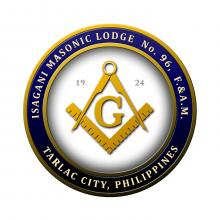 This lodge was named after the poet Isagani, a character in Jose P. Rizal's novel, El Filibusterismo. The name initially chosen for the lodge by the organizers was "Central Luzon," it being located in Tarlac which is a part of Central Luzon, however, they finally settled for Isagani.

On May 7, 1924, Grand Master Wenceslao Trinidad approved a petition signed by 14 Master Masons led by Sisenando Palarca, Roman Domantay, Procopio Espiritu and Francisco Urutia, for the issuance of a dispensation for the formation of Central Luzon Lodge in Paniqui, Tarlac. On January 27, 1925, having complied with all the requirements of the Grand Lodge, the lodge was granted a charter, but under the name Isagani Lodge No. 96.

On April 18, 1925, at 8 pm, Grand Master Christian C. Rosenstock constituted the lodge after which the officers were installed. The ceremonies took place in Paniqui. They were in public and attendance was large.

Isagani Lodge met in Paniqui up to the middle of 1937. In that year, its meetings were transferred to Tarlac, Tarlac. In that year too, the lodge was able to construct a Temple on a lot donated by General Servillano Aquino.

When the Second World War broke out in 1941, Isagani Lodge, like all other loges in the Philippines, went into darkness, but at the end of the war it immediately resumed its labors. Its ruined Temple was repaired and on January 14, 1948 the lodge held its first public installation of officers after liberation at the Tarlac "Glorietta" Public Square. General Liberato E. Littawa was installed as Master.

In 1974, the members had to tear down their dilapidated Temple and construct a new one. Construction started under the term as Master of Miguel F. Fontanilla and was finished a year later without any major problem. The new Temple was consecrated on April 5, 1975. Incidentally, in 1975, also, the lodge organized the Tarlac Chapter of the Order of DeMolay.

Through the years Isagani Lodge has been engaged in charitable and benevolent activities. In 1986, it started its Scholarship Program, and in 1995, it launched its annual medical and dental outreach program for the depressed communities of Tarlac Province. Isagani Lodge, likewise, never fails to extend a helping hand to victims of calamities, like the great floods that swept Central Luzon in 1972 and the eruption of Mt. Pinatubo in 1991.

Isagani Lodge is proud of the fact that many famous persons in Tarlac Province have passed through its portals. Some of them are Luis Morales, and long-time municipal Mayors Arcadio Evangelista, Francisco Flor Blanco, Esteban Alberto and Clemente Terso.