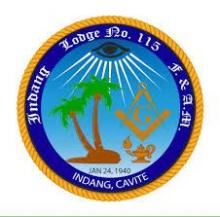 Indang Lodge was named after the town in the province of Cavite where it is situated. Indang or indan is a local name for Artocarpis cumingiana, a tall tree, the boiled bark of which provides a remedy for stomachaches. It is said that the indan tree grew predominantly in the locality during the 17th century.

The acknowledged father of Indang Lodge is Ceferino Purisima, District Superintendent of Schools, who tried to propagate Masonic teachings in every town and province where he was assigned. He broached the idea of organizing a lodge in Indang, Cavite in the hall of Bagong Buhay Lodge No. 17, Cavite City, in 1938 and gained the support of the Master of the lodge, Agustin Galang, and all its members.

On November 27, 1938, an organizational meeting was held at the Home Economics Building of the Indang Rural High School, now known as Don Severino Agricultural College (DSAC). Twenty-seven brethren representing several lodges in Cavite attended the meeting, presided by Galang. Twenty-six of the 27 signed a petition for dispensation to organize a new lodge in Indang. They also elected the following as officers of the lodge: Ceferino Purisima, Master; Marcelino Constantino, Senior Warden; and Menandro Vida, Junior Warden and A. Galang, Acting Secretary.

During the period that the lodge was under dispensation, it received 23 petitions for membership. Seventeen of the petitioner received the degrees, but only 3 of them, all residents of Indang, were raised to the Sublime Degree of Master Mason.

When the Great Pacific War broke out in 1941, Indang Lodge was forced to temporarily close, but the war did not dampen the Masonic spirit of the members. As soon as peace was restored, the members reestablished Indang Lodge. In 1945, they rented the house of De las Alas at the corner of San Gregorio and Calderon Streets where they held their meetings. Two years later, they transferred their meeting place to the house of Eufracio Avilla at the corner of San Gregorio rid  Balagtas Streets. In 1948, the members erected their first Masonic Temple at Plaridel Street. This edifice served as the home of Indang Lodge No. 115 for almost 30 years.

Because of the impeccable reputation of the members of the craft in Indang, membership increased to a point where the Old Temple became too small to accommodate those attending the meetings. They disposed of their Temple in 1976 and transferred temporarily to the Vocational Agriculture Building at DSAC. Construction of a new Temple on a lot at Green Valley Subdivision donated by Bro. Felix Baeson started in the early part of 1977 under the leadership of WB Petronio Vicedo. Though the new Temple was far from complete, the brethren proudly installed their officers for Masonic Year 1978 in this building. The building has since become the second permanent home of Indang Lodge No. 115.

With determined leaders and dedicated support from the members, Indang Lodge No. 115 looking to the future with confidence and a strong conviction in its ability to exemplify the ideals of Masonry and further serve the upland communities of Cavite through the MASONIC WAY.