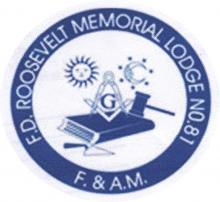 This lodge was originally called Liwayway, a Tagalog word for "dawn," or "light of the morning." After a series of mergers with other lodges, it became Modestia-Liwayway-Hagdang Bato Lodge. Then in 1948, the members changed its name to F.D. Roosevelt Memorial Lodge.

Franklin D. Roosevelt is the thirty-first President of the United States, the first President ever to serve more than two terms. Roosevelt has an impressive Masonic record. He was a member of Holland Lodge No. 8 in New York, having received the degrees in 1911. He was also a 32° Scottish Rite Mason and Shriner. He was present and took part in the degree work when his son Elliot was raised on February 17, 1933. At that time Roosevelt was President-elect. On November 7, 1935 two more sons, James and Franklin D., were raised and their father was present. During his years as President, Roosevelt received many delegations of Freemasons at the White House. On April 13, 1934, he became the first honorary Grand Master of the Order of DeMolay. Filipinos best remember Roosevelt as the American President who approved the Constitution of the Philippine Commonwealth in March 1935.

F.D. Roosevelt Memorial Lodge was founded under the name Liwayway Lodge by 14 Master Masons, led the Reyes clan of Bigaa, Bulacan which included Ildefonso S. Reyes, Julian Reyes, Marcial R. Reyes and Teodoro Reyes. Grand Master Quintin Paredes issued the dispensation for the organization of the lodge on May 16, 1922, designating Teodoro Reyes, as the Dispensation Master; Ildefonso Santos Reyes, as the Senior Warden and Pancracio Atienza, as the Junior Warden. On January 24, 1923, the Grand Lodge granted it a charter. It was constituted in Bigaa on March 3, 1923 by a team of Grand Lodge Officers led by Grand Master Frederic H. Stevens and Rt. Wor. Francisco A. Delgado. The ceremonies were public and the attendance was large. Addresses were made by MW Stevens, Rt. Wor. Delgado and the Worshipful Master, Teodoro Reyes. Following the ceremonies, a banquet and dance was given in honor of the Grand Lodge officers by the lodge which was attended by many residents of Bulacan and Manila.

Liwayway Lodge encountered early difficulties. Many of its members were working in Manila and they found it extremely difficult to attend lodge meetings. Thus, for example, Ildefonso S. Reyes, its Master in 1924, was residing in Mayhaligue, Manila. Julian Reyes, its Master in 1925, was working with the Bureau of Agriculture in Manila. Its Secretary in 1924, Francisco Mendoza, was working in the Manila Hotel and Marcial R. Reyes, the Secretary in 1926, was living in Azcarraga, Manila. By 1927, Liwayway Lodge had become "too poor and too small" to maintain an independent existence so it merged with another floundering lodge, Modestia Lodge No. 83. The Grand Lodge approved the merger on January 25, 1928 and the two became known as Modestia-Liwayway Lodge No. 81. Meetings of the lodge were transferred to 520 San Marcelino, Manila. After nine more years, the lodge merged with still another weak lodge, Hagdang Bato No. 87, and for a while was known as Modestia-Liwayway-Hangdang Bato Lodge No. 81. In 1948 the members decided to change the name of the lodge to F.D. Roosevelt Memorial Lodge No. 81 in honor of President Franklin Delano Roosevelt.

In 1952, the members of F.D Roosevelt memorial Lodge had a chance to personally it their respect for President Roosevelt when his widow, Eleanor, paid a brief visit to the country. In their February 1952 meeting a resolution was passed to present Eleanor with a gift as their testimonial of appreciation. The Master of the lodge, WB Estanislao Gabarda, also wrote her the following letter:

In appreciation of the contribution of the late F. D. Roosevelt, your distinguished husband, in helping bring about understanding and world peace among men of all races, we have named our lodge, F. D. Roosevelt Memorial Lodge No. 81, F. & A. M., under the Grand Jurisdiction of the Philippine Islands.

As a simple token of our gratefulness and abiding faith in him and in his ideals, this modest gift is heartily dedicated to your goodself.

When Eleanor went to Welferville, the Acting Superintendent of that institution, WB Sesenio Rivera, arranged to have a delegation of the lodge personally present the gift and letter to her. She was very thankful, and when she read the letter, she embraced it. She then opened the gift - an embroidered piña handbag - and raised it for all to see.

The name F. D. Roosevelt Lodge seems to have been a propitious choice because since 1948, the lodge has enjoyed a peaceful, prosperous, and fruitful existence.