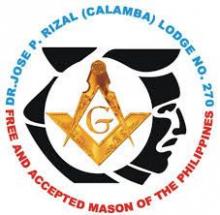 For the etymology of Jose Rizal, see the history of Rizal Lodge No. 20. The word Calamba, in parenthesis, is to indicate that the lodge meets in Calamba, Laguna, the birthplace of Dr. Jose P. Rizal.

The story of the lodge at Calamba began with her parent lodge at Los Baños - Makiling Lodge No. 72. Before the last world war, Makiling Lodge 72 had its venue in Calamba, birthplace of the country's premier Mason, Dr. Jose Rizal. Thereafter, the seat was transferred to nearby Los Baños, because at that time almost all the Makiling brethren were residents of that town.

It was in the early 80's when a number of brethren from District No. 11, led by the late DDGM VW Robin Alcantara, launched a spirited drive to set up a separate lodge in the town of Rizal's birth. Fifty-six Master Masons who were members of Malinaw Lodge No. 25, Pinagsabitan Lodge No. 26, Makiling Lodge No. 72, and Sierra Madre Lodge No. 181, petitioned the Grand Lodge for a dispensation to organize a lodge in Calamba to be named Dr. Jose P. Rizal (Calamba) Lodge. On April 15, 1982, barely a week before the start of the annual communication of the Grand Lodge for that year, Grand Master Simeon Rene Lacson issued the requested dispensation. But because the lodge was so young, the Committee on Charters believed it was "premature" to grant it a charter, so its dispensation was extended for one year. The following year, the lodge failed to comply with requirements for the issuance of a charter. The determination of the members, however, did not wane. They asked for more time. At the annual communication in April 1983, the Grand Lodge extended their dispensation anew, this time up to March 31, 1984. At the start of 1984 the lodge was still floundering. The members requested for a special dispensation to extend the UD life of their lodge up to April 28, 1984, which was granted. At this point the lodge suddenly sprang to life. The Committee on Charters explained: "it appears that these brethren were working under the wrong premise. They thought they could not hold meetings and accept candidates, so instead of accepting candidates, they referred them to other lodges, although they took part in all the degree conferrals, until two month ago when they were correctly informed. Since then, they have raised two and passed four." Upon the recommendation of the Committee on Charters, the lodge was granted a charter on April 27, 1984 and assigned number 270.

Thus commenced the formal restoration of the Masonic emblem at Calamba. The progress was slow and tentative; at times, the efforts seemed to flag and fail. But the confidence and generous hearts of few pioneering brethren held on. Stated meetings were initially held in the main building of the Jose Rizal Memorial School.

After two years of existence, the meetings of the lodge were transferred to the residence of WB Benito L. Lit at Barangay Halang, Calamba, Laguna. In 1989, the lodge was again moved to the Dr. Jose P. Rizal Memorial School (Central I) in Calamba. At this time the members were able to acquire a small 122 sq. m. lot Fund raising activities were immediately conducted for the erection of a Temple.

On March 13, 1990, construction was commenced. The brethren had to move fast. For it was agreed that the temple should be inaugurated on June 19th. To their surprise they beat the deadline. On June 19, 1990, the Temple costing approximately P 400,000 was inaugurated and dedicated.