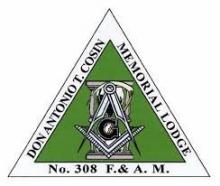 Named after WB Antonio T. Cosin who was trice Master of Maguindanao Lodge No. 40. Initiated in 1919, Cosin was active in the Fraternity till his death on October 14, 1975 at the age of 87.

For decades, WB Cosin was the town executive of Tagoloan, Misamis Oriental which is the seat of the lodge. He was the Municipal President of the town from 1919 to 1935. From 1952 to 1963 he was repeatedly elected as its Municipal Mayor

On July 5, 1993, Benjamin O. Go and thirty-two other Master Masons signed a petition for a dispensation to form a new lodge in Tagoloan, Misamis Oriental to be named Don Antonio T. Cosin Memorial Lodge in honor of the grand old man of the town. Grand Master Rizal D. Aportadera issued the requested dispensation on July 15, 1993, and instituted the lodge on August 5, 1993 at the Honasan Hall, PHIVEDEC Industrial Estate at Tagoloan, Misamis Oriental.

The lodge accepted petitions for degrees, even while it was still working under dispensation. The first to appear on its trestle board were the names of Danilo P. Lagbas, Municipal Mayor of Sugbongcogon, Misamis Oriental, Edgar S. Cabanlas, a Board Member of Misamis Oriental, Anthony C. Agudo, a businessman, Romualdo S. Lagsa, a Geodetic Engineer, Joselito B. Tadeo, a salesman, Cayetano W. Paderanga III, a bank employee, and Nuzar N. Balatero, a BIR Revenue Officer. Many others followed.

The first petitioner to be raised to the sublime Degree of Master Mason was Danilo P. Lagbas, followed by Romualdo S. Lagsa. After them, Cayetano Paderanga III and Nuzar Balatero were also raised.

By the time the Grand Lodge held its annual communication in April 1994, the lodge had already initiated six candidates, passed five, and raised four to the 3rd degree of Masonry. Based on its performance the lodge was granted a charter on April 29,1994. It was constituted by Grand Master Pablo C. Ko, Jr. on June 15, 1994 as Don Antonio T. Cosin Memorial Lodge No. 308 with WB Ignacio B. Moreno as the Worshipful Master.

The lodge is now vibrant and alive with 32 regular members and 15 dual members.