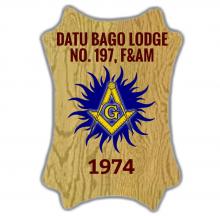 Named after Datu Bago who led the Bagobos in resisting Jose Oyanguren's efforts to colonize Davao. In 1847 Oyanguren undertook a campaign, own expense, to colonize the Davao Gulf region with the understanding that he would be permitted by the Spanish government to remain as governor of thecaptured territory for a period of ten years. He was able to establish a foothold near the pirate depot the territory at his Sarangani Island, but after two years it was decided on was too isolated to colonize properly.

On July 26, 1973, several Master Masons in good standing, led by Rizal D. Aportadera, sent a petition to the Grand Lodge praying for the issuance of a dispensation authorizing them to organize a lodge in Davao City to be named Datu Bago Lodge. The two existing lodges in Davao City, Sarangani Lodge No. 50 and Davao lodge No. 149, favorably endorsed the formation of the lodge On July 3, 1973 Grand Master Ruperto S. Demonteverde issued the requested dispensation and on August 9, 1973 the lodge was formally organized.

At the annual communication held in April 1974, the Committee on Charters found that the lodge, since its organization, had been holding its meetings regularly and had eleven petitions for degrees on its trestle board. On the recommendation of the Committee, the lodge was granted a charter and assigned the number 197.