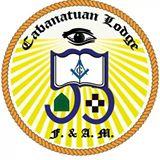 This lodge is named after the City of Cabanatuan in which it is established. There are at least three versions on the origin of the name Cabanatuan. In one version it is claimed that Cabanatuan means "a place where banato trees are plentiful." Banato is a Tagalog word for mallotus philippensis, a small tree known officially in pharmacopoeias as kamala. In a second version it is said that the term comes from "Cabatuan" or a place with plenty of stones. A third version would make us believe it originated from "caban at tua" or "cavan (of palay) and happiness,” a very unlikely combination.

Before the organization of Cabanatuan Lodge in 1919, very little was known about Freemasonry in Cabanatuan. A though Masonic Triangles had been established in Nueva Ecija in the 19th Century (Triangulo Morayta in Gapan, Ruiz in Peneranda, Centeno in Cabiao, Dampulan in Jaen , and Tabon in San Isidro), not one had been set up in Cabanatuan. Moreover, even those that were established in the other towns of Nueva Ecija closed down when the Philippines Revolution started in 1896.

To promote and disseminate Masonry in Cabanatuan, a group of Masons headed by Manuel Tinio and J. Vicente Salazar, Sr. decided to organize a Masonic lodge in the town. They first met in April of 1919, and commissioned Eusebio G. Dimaano, who was then Deputy of the Provincial Treasurer of Nueva Ecija, to lead the movement.

Dimaano invited all known Masons to a meeting on June 29, 1919. Twenty-two responded. At this meeting they elected Eusebio G. Dimaano as Master; Jose B. Mendoza as Senior Warden; and Emilio Leyva as Junior Warden.

A petition for Dispensation, dated June 29, 1919, signed by twenty-five Master Masons was sent to the Grand Lodge and on September 4, 1919, Grand Master Milton Earl Springer, issued the requested Dispensation.

The founding fathers were very enthusiastic. Stated meetings were held regularly and special meetings were called from time to time. At the stated meeting on November 1, 1919, the first petitions for degrees were given to due course and on December 20, 1919, the EAM degree was conferred upon Jose V. Buenaventura and Doroteo M. Joson

On January 28, 1920, the Grand Lodge issued a charter to Cabanatuan Lodge No. 53. On October 9, 1920, Grand Master Rafael Palma and his party boarded a special in Manila bound for Cabanatuan to constitute the lodge at the Provincial Capitol. 1,200 people witnessed the ceremonies. Thereafter, the officers were installed. The principal officers were: J. Vicente Salazar, Sr., Master; Simplicio Ocampo, Senior Warden; and Isidoro Gonzalez, Junior Warden.

During the early years of its existence Cabanatuan Lodge held its meetings in rented quarters. Desirous of having of Temple of their own, the members organized the Cabanatuan Masonic Temple Association on March 16, 1922 whose main aim was to construct a Temple. The association conducted a rigid campaign for funds and by December 1927 the lodge had its Temple.

In 1924, the members of Cabanatuan Lodge had an opportunity to display their Masonic spirit. In that year, anti-Chinese riots were staged in Cabanatuan which placed two Chinese Masons, Bo So Chan and Sy Chaw, in eminent personal danger. Without hesitation the members of Cabanatuan Lodge, led by Simplicio Ocampo, rushed to the rescue of their Brothers in distress. Kasilawan Lodge, the mother lodge of the Chinese Masons, thanked Cabanatuan Lodge profusely and the editor of The Cabletow praised the Cabanatuan Masons for the "striking evidence of their Masonic sentiments.” The next opportunity for the Cabanatuan Masons to display their Masonic spirit came during the Second World War. Although the war forced the closure of the lodge, it did not put an end to the practice of the tenets of Masonry by the members. They helped the underground movement and supported the distressed and the needy. Assistance was also rendered to the Filipino and American prisoners of war in Cabanatuan and Bongabon.

Nueva Ecija was liberated on February 1, 1945. The Master, Romualdo Vijandre, mobilized the members to re-organize the lodge. As all paraphernalia had been destroyed, Vijandre gathered aluminum parts from destroyed airplanes and converted them into officer's jewels. Even empty shells were used for the stands of the rods and candlesticks.

Because of the destruction of the Temple by fire on January 14, 1945, the lodge had to rent anew the third floor of the old building on Sanciangco St. which had formerly housed the lodge.

In 1952, the construction of the new Masonic Temple was begun. Grand Master Sydney M. Austin laid the cornerstone on September 4, 1952 and two years later, on March 20, 1954, the completed Temple was dedicated.

Cabanatuan Lodge has been for decades the nucleus of Freemasonry in Nueva Ecija. Its members have involved themselves in community, charity, civic and social services. The lodge has been contributing to the cause of humanity, while its members are either active officers or supporters of charitable, social and civic movements and are giving much of themselves to assist the distressed and the needy.

This lodge has produced many eminent Masons. MW Clifford C. Bennett, MW Vicente Orosa, MW Mariano Q. Tinio, and MW Danilo D Angeles, all Grand Masters, were members of the lodge. Also members were Manuel Tinio, J. Vicente Salazar and Felino Villasan, all Governors of Nueva Ecija. And, of course, there is Doroteo M. Joson, the greatest of them all, who for decades was the mainstay of the lodge's Masonic endeavors.