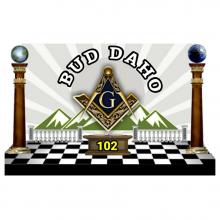 Bud Daho is the lava cone of an extinct volcano with an altitude of 2000 meters in the town of Patikul, Sulu, not far from the seat of the lodge. "Bud" is a Tausog term meaning "mountain," while "Daho" refers to the name of a person.

In 1906 Bud Daho was the scene of a fierce and bloody battle between the Muslims and the American forces. It was in commemoration of this famous struggle that the name Bud Daho was chosen for the lodge.

Bud Daho Lodge is the outgrowth of the Sojourners Club of Jolo that was founded by Valeriano Sison, Geo N. Massabni, Jose Polotan and Julius Schruck. On June 12, 1926, fourteen members of the Club decided to organize a lodge. They were predominantly American, German, Spanish and Filipino, who were the elite of the business community, the professionals and the military. Major Dorr Hand Malone, the American Chief Constable of Sulu, was the moving spirit behind the movement.

A petition for a dispensation was prepared and on June 25, 1926, Grand Master Francisco A. Delgado authorized the organizers to form a lodge to be named Bud Daho Lodge. On January 25, 1927, during the annual communication of the Grand Lodge, Bud Daho Lodge No. 102 was granted a charter.

The initial meetings of Bud Daho Lodge were held in San Raymundo, Jolo, Sulu. Since most of the members belonged to the military and civil government the meetings were transferred, starting on April 7, 1928, to the military building in the walled city, locally known as the Chapel Building.

Over the next ten years the lodge ushered in the golden age of Freemasonry in Sulu especially when Hadji Butu and Hadji Moh. Ebbah were raised to the sublime degree of Masonry. Hadji Butu, Senator for Mindanao and Sulu and a Muslim religious leader was raised in Sinukuan Lodge No. 16 on October 23, 1928. Being a native son of Sulu this event changed the general attitude towards our ancient order and, in fact, marked the popularity of Masonry in that province. Hadji M. Ebbah, was initiated on July 7, 1930 and raised on August 16, 1930, thus becoming the first Muslim to join Bud Daho Lodge. The early members, however, did not content themselves with their initial triumphs but forged ahead to respond to the broadening needs of the times.

The phenomenal growth of the Craft in Jolo was brought to a grinding halt in December 1941 when the Japanese invaded Taglibi, Patikul about 16 kilometers west of Jolo. When the American forces were finally able to liberate Sulu, the Masons found their Temple burned to ashes. It was not until 1947 that Bud Daho Lodge No. 102 was revived and resumed its labors. Bro. Benigno S. Viray constructed a nipa house in his garage which was used as the hall of Bud Daho Lodge. For almost two years, the members met in this but until 1950 when they transferred to a site in front of the Town Hall. Incidentally it was in this new site in 1952 where Bro. Tating Sangkula became the first Muslim to become Worshipful Master of Bud Daho Lodge.

Parenthetically, when the military building which was used by the lodge was burned, the lot on which it was erected, was proclaimed by the President as disposable land under the Public Land Law. The Masons then formed a corporation and applied for a lot. Later they erected the Bud Daho building on the lot, thanks to the generous financial donations of Bro. Tar Ting Leck.

On August 10, 1971, the Temple of lodge was again burned to ashes. Once more the Sulu Masons had to rebuild upon the ruins of the past. In the meanwhile, they met on the Roof Garden of the building of Bro. Wu Siok Boon, a worthy Mason and a gentleman.

Some accomplishment of Bud Daho Lodge are worth mentioning:

Bud Daho Lodge, now ripe in age, mellow in experience, looks back to the past, with pride and to the future with hope.