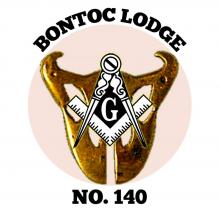 This lodge is named after the town of Bontoc in Mountain Province where it is located.

Bontoc Lodge No. 140 came into being deep in the mountains of Northern Luzon by virtue of a dispensation issued by Grand Master Werner P. Schetelig on November 11, 1954. During the annual communication held in April 1955, the Grand Lodge, upon the recommendation of the Committee on Charters, granted it a charter and assigned to it number 140. The approved charter of Bontoc Lodge was printed and on June 25, 1955 was signed by then Grand Master Camilo Osias. The lodge was finally constituted on February 25, 1956 by Senior Grand Lecturer Hermogenes Oliveros, acting through an authorization extended to him by the Grand Master. The first Master was WB Sotero A. Torralba.

One important project of the lodge was the construction of its own Temple. An Association was organized for the purpose and several brethren made personal pledges of support. On January 23, 1965, Grand Master Charles Mosebrook, motored to Bontoc and personally officiated at the laying of the cornerstone of the temple. The members felt so much obligated that they started paying their pledges. The Association's officers also intensified their efforts to solicit funds from other brethren. Well-meaning friends extended their help in cash or in kind when approached. The big boost came when WB Victorino M. Ringor donated P2,000 and WB Pedro R. Falcon extended a loan of P1,000. The construction continued and by the end of 1968, a Lodge Hall in the second story was made suitable for Masonic purposes.

On January 24, 1969, the lodge held a public installation of officers in the half-finished Temple. After some additional construction work, the Lodge Hall was finally completed at a total cost of P50,000.00 .The association now derives an income from rentals in the ground floor.