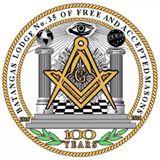 The batangas is the name of the city and province where this lodge is located' and the Tagalog term for "outrigger." Other names proposed for this lodge in an 1 organizational meeting held on October 6, 1915 were Kumintang and Batangan. 1 Kumintang is the name of a region and its inhabitants during the early Spanish conquest. It comprised what is now Batangas, Laguna, Quezon, part of Rizal as far a, Morong, and the islands of Mindoro and Marinduque. Batangan, on the. other hand, is another name for Batangas Province.

Batangas Lodge was founded by 32 Batangueños under the leadership of Miguel F. Avelino and Engr. Juan M. Gutierrez and with the support of Provincial Treasurer Joseph W. Grow. After holding the required two organizational meetings, they filed a petition for affiliation with the Federation of the Gran Oriente Espariol in Spain, through its Regional Grand Lodge in the Philippines. When they satisfied all the requirements, the lodge was provisionally admitted into the Federation. Then on February 16, 1916 the Gran Oriente Espanol granted a charter to the lodge officially designating it as Batangas Lodge No. 383. Thereafter the lodge was constituted and its first set of officers under charter were installed into office, to wit: Miguel F. Avelino, Venerable Master; Celestino Aragon, First Vigilant; Jose Gonzalez, Second Vigilant; Jose Arpal, Treasurer; and Sisenando Ferriols, Secretary Guardian of the Seal.

In the next few years there was a marked increase in the membership of the lodge. Some prominent personalities of Batangas joined the lodge, among whom were Dr. Jose P. Laurel, who would later became the President of the Philippines, and Wenceslao Trinidad, who became Grand Master of the Grand Lodge.

In 1920, when Trinidad was the Master, the lodge acquired a two-story building and the 2, 363 sq. m. lot on which it was erected. This became the Batangas Masonic Temple. A wealthy American Mason, Solomon Russel, advanced the cost of acquisition which the members paid back later.

When the Great Pacific War broke out in 1941, the lodge was forced to close. Some members joined the underground movement. WB Lazaro Malabanan harbored four American officers and ended up on the most wanted list. Bro. Pedro Pasia organized a guerilla unit which supported the Americans during the liberation of Batangas in 1945.

The lodge had one big problem. Its Temple was burned to ashes during the liberation of Batangas. Fortunately, there was a Batangas Square and Compass Club organized by American officers and enlisted men in Base R in Batangas. The members of the Club under the leadership of Joe Vaugh, James L. Baird and Paul Endsley, requested all Masons in the area to lend a helping hand in the construction of the building. Most of the work was done at night since all the enlisted men were busy during the day. When Saturnino David became the Master, he also addressed the problem. He negotiated for a loan with the Philippine National Bank and with the money that the lodge received from the War Damage Commission, he started construction of a new Temple. After the Temple was completed, portions were rented out to the Batangas Post Office and the Provincial Library, while the top floor was devoted to lodge use.

Batangas Lodge has progressed through the years and has made its presence felt in the community. The members have never neglected to practice charity. They often extend assistance to victims of calamities, like fires, floods, typhoons and earthquakes. They have adopted scholarship programs for poor students and maintained dental and medical clinics for the impecunious.

Through the judicious use of funds the members have been able to constantly improve their Temple. On January 31, 1961 they inaugurated a new Temple. But they did not stop there. They made further improvements to provide rooms for the DeMolav, the Scottish Rite Bodies and other appendant organizations. Then in 1991 they acquired-a half-hectare land which they earmarked as the future ,ite of a new Temple.

Today, Batangas Lodge is a very stable lodge. It is financially sound and composed of Masons firmly committed to teachings and tenets of Masonry.