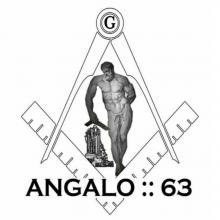 The name of this lodge is derived from Angngalo, an obsolete word (Tagalog and Ilocano) used to designate the Great Creator or Lord of Creation, and from Anghalo, the Ilokano word for hammer or maul.

This lodge was founded on August 14, 1920 by 16 Master Masons in a meeting held in Vigan, Ilocos Sur in the office of the Provincial Treasurer. They were issued a dispensation on October 1, 1920 with Juan R. Avelino designated as Master and Urbano Banez as Junior Warden. After the lodge complied with all the requirements, it was given a charter on January 21, 1921. On April 2, 1921, Grand Master Edwin E. Elser, assisted by Quintin Paredes, Teodoro M. Kalaw, Daniel Maramba, Clark James, Ceferino Hilario, Jose Padilla and other Masonic dignitaries constituted Angalo Lodge No. 63 and installed its officers at the Municipal Building Vigan, Ilocos Sur.

For fifty years Angalo Lodge did not have a Temple of its own. Meetings were held in cramped rooms rented from homeowners. In 1972, it succeeded in constructing a semi-permanent building on a rented portion of the lot of UCCP, then in 1994 it started work on a Temple on a lot donated by the family of a Master Mason. By 1996 the building was habitable and on November 19, 1999 Grand Master Franklin J. Demoteverde dedicated it.

For a number of years, the lodge maintained a free children's clinic in the Christian Hospital in Vigan for the benefit of worthy Masons and their families.

Angalo Lodge prides itself in having "given birth" to three lodges in the area, namely: Laoag Lodge No. 71, Abra Lodge No. 86, and Lam-ang Lodge No 164. Outstanding citizens and achievers have graced the roster of the lodge, among whom are Provincial Governors Alejandro Quirologo and Lupo T. Bitang, Justice Amante Q. Alconcel and Manila City Fiscal Jesus Guerrero.