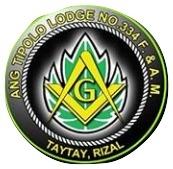 Ang Tipolo lodge was named after a tree popular among native Rizalenos which is commonly used for herbal and medicinal purposes and after which the recently-chartered Antipolo City was named.

Significant events that led to the creation of Ang Tipolo Lodge No. 334 are, as follows:

Having successfully acquired the endorsement of Marikina Lodge No. 119 and Juan Sumulong Memorial Lodge No. 169, and with the encouragement of VW Benedicto A. Madarang, DDGM of Masonic District No. 11, a petition for a dispensation to form a new lodge was filed with the Grand Lodge by 36 brethren, among whom were: VW's Leocadio SC Santiago, Jr., Edgardo A. Alcanites, Peter U. Pagunuran, WB's Nazario G. Cordova, Mario G. Navarro, Ramon Nunez and Artemio C. Cacal. Grand Master Franklin J. Demonteverde approved the petition and issued a dispensation bearing the date December 20, 1999. Named as dispensation officers were Leocadio SC Santiago, Jr, Master; Nazario Cordova, Senior Warden, and Peter Pagunuran, Junior Warden. On December 19, 1999, MW Demonteverde instituted Ang Tipolo Lodge UD at the Stafford Hall of the Grand Lodge.

Subsequently, the lodge was granted a charter during the April 2000 ANCOM and the number 334 was assigned it. The lodge was constituted on May 13, 2000 at Antipolo City with Grand Master Oscar V. Bunyi officiating the impressive ceremonies. On that day too, installed into office were VW
Leocadio SC Santiago as Charter Master and WBs Nazario G. Cordova and Peter U. Pagunuran as Senior and Junior Wardens, respectively.