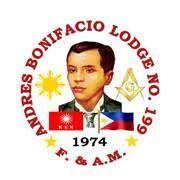 Named in honor of Andres Bonifacio, one of the founders and later Supremo of the Katipunan. Bonifacio was born of poor parents in Tondo, Manila on November 30, 1863. He led the Cry of Pugad Lawin that sparked the 1896 Philippine Revolution. Bonifacio was a member of Taliba Lodge No. 165 under the Gran Oriente Espańol.

Labong Lodge No. 59 recommended the formation of this lodge. On October 1, 1973, Grand Master Ruperto S. Demonteverde issued a dispensation authorizing its formation and on October 26, 1973 the formal organizational meeting of the lodge 1974, the Committee on Charters found that the lodge had already initiated, passed and raised four candidates and had a total membership of 44 Master Masons and 1 Entered Apprentice. Accordingly, the lodge and assigned number 199.

On June 22, 1974, Andres Bonifacio Lodge was constituted as a regular lodge by MW John O. Wallace. The following set of charter officers were also installed: WB Jose B. Perez, Bro. Herminio C. Navia and Bro. Salvador C. Diaz, as Worshipful Master, Senior Warden and Junior Warden, respectively. Initially having its domicile at Caloocan City, it has since established residence at the Capitol Masonic Temple in Quezon City together with ten other sister lodges.

The constitution of this lodge was a most welcome addition to the then fast-growing Masonic district that was made possible through the untiring efforts of VW Teofilo C. Leonidas, at that time the District Deputy Grand Master of Masonic District No. 9.

Andres Bonifacio Lodge has produced a large number of brethren who have distinguished themselves through their mastery of Masonic ritual, foremost of whom is VW Fernando V. Pascua, Jr, the dean of Filipino ritualists.