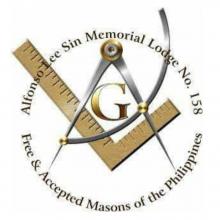 This lodge was first named Dagupan City Lodge after the City where it is located. Upon the death of Bro. Alfonso Lee Sin the same was renamed in his honor in recognition of his numerous humanitarian deeds and his invaluable assistance to the lodge.

The origin of this lodge dates from an informal meeting held by Alejandro D. Cruz of Mayon Lodge No. 61, with Eutiquiano P. Nava, Lee Sin, Anselmo Olaer, and Jacinto Abad, all of Pangasinan Lodge No 56, for the purpose of setting up a sister lodge in Dagupan.

Things moved fast. A petition to the Grand Lodge for a dispensation to form Dagupan Lodge was approved on July 1, 1960. Nava was appointed as the first Master, while Olaer and Abad were named the Senior and Junior Wardens of the new lodge.

The first meeting of Dagupan Lodge, U.D., was held in the office of WB Lee Sin, then Master of Pangasinan Lodge. He donated all the lodge paraphernalia. He also immediately started a movement for the construction of a Temple for the lodge. On August 9, 1960, a 1591 sq. m. land in Tapuac District of Dagupan was acquired. Bro.Lee Sin paid for two thirds of its price, while the other members shouldered the balance. The construction of the Temple was started on January 17, 1961. With Bro. Lee Sin contributing generously, the Temple was finished before the end of the year. In April of the same year, the lodge received its charter and on May 8, 1961 was constituted as Dagupan City Lodge No. 158 by Past Grand Master Macario Ofilada. Immediately thereafter, MW Esteban Munarriz installed the officers led by its Master Eutiquiano Nava.

Bro. Lee Sin died on August 20, 1979. At that time he was looked up to as the "Father of Freemasonry" in Pangasinan so the members of the lodge unanimously decided to rename their lodge in his honor in recognition of his numerous humanitarian deeds and his invaluable assistance to the lodge.

Among the better-known members of this lodge are PNP Chief Hermogenes E. Ebdane, Jr. and VW Mitch Nava.